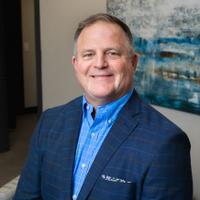 Scotty began his career in 1996 when he joined Prudential Securities as a brand-new advisor. In early 2000, he joined Ray Bowles and his team at Financial Consultants of TN. In 2006, he purchased the practice from Mr. Bowles and eventually moved the practice to Hendersonville in 2010. In 2015, he joined LPL where he met his current partners Eric Stockton and Clay Blair. Together, they formed Guided Wealth Partners.

Scotty attended Columbia State on a baseball scholarship and studied business. He holds a Series 7, 63, 65, 51 and 24 through LPL and also holds a Life and Health license.

Scotty is married to Leslie and they will celebrate their 27th anniversary this year. They have three grown children. Leslie has recently entered the nursing program at Union University. Scotty loves the Tennessee Volunteers and spending lots of time on his Kentucky deer lease.